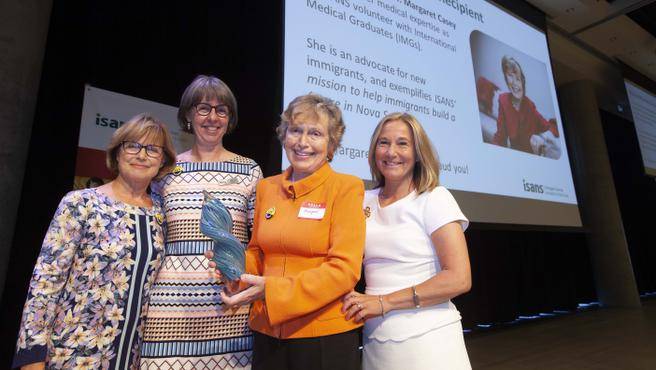 Margaret Casey laughed in a sheepish “oh-no” fashion when I called her Wednesday to talk about the award she was getting in a few hours.

I run into her all over the place: in Point Pleasant Park where she jogs alongside her Labradoodle, Rusty; at the North End Community Health Centre where she worked for 25 years and is a director for life; around important community issues like the fate of the St. Patrick’s-Alexandra school site.

In all the conversations we’ve had, it’s been hard to get her to talk about herself. Wednesday was no different.

Her medical career she calls “mundane.”

Furthermore, she’s just a “tiny cog” in the network of people and services trying to make life easier for immigrants to this province — even though she has done enough to be the recipient of this year’s Immigrant Services of Nova Scotia award which, according to the ISANS news release, “recognizes an individual, community group, business or employer who has demonstrated exceptional and innovative efforts in welcoming immigrants to Nova Scotia and in assisting them to successfully integrate into the community.”

So allow me to fill in a few of the blanks about this woman who has received honorary degrees from Dalhousie and Mount Saint Vincent universities, along with the Order of Nova Scotia.

She grew up in Toronto and attended med school at Dalhousie, from which she graduated in 1968.

And her quarter-century at this badly needed medical clinic in this hardscrabble part of the city has been a “life-changing experience” for the woman.

She’s happy, in fact, to talk about the clinic, of which she became executive director in 1976, and the collaborative approach — along with the focus on economic and social factors like poverty, nutrition and education to improve health incomes — that became its hallmark.

When it comes to the reason for my phone call — her role as a champion of immigration — Casey is, shall we say, a little more subdued.

The facts, however, are these: After leaving the north-end clinic Casey became director of admissions at Dal’s medical school.

There she met a lot of international medical graduates. About 13 years ago, she’s not exactly sure how, she started working with these aspiring doctors who face a variety of significant hurdles to becoming certified as physicians in Nova Scotia.

Casey helps them in a variety of ways: by “providing continuous support and encouragement to newcomer physicians” according to the ISANS release, and also doing what she can to integrate them into the provincial health-care system.

During our conversation, Casey talked mostly about how she helped the foreign medical grads prepare for the Medical Council of Canada’s clinical exams.

“A lot of what I do these days is cultural,” she explained.

By that she means not just providing wise counsel about how to prepare the type of case studies they will handed come exam time.

But also in less obvious things, like getting them to ask patients the kinds of questions that, in a different society, might make them doubt their physician’s competence.

“It’s a hard road for them,” Casey says.

In Nova Scotia, after all, even homegrown med school grads face a challenge landing an interning position.

“I so admire their courage, their persistence and commitment,” says Casey, who had a dozen or so foreign students, mostly from the Middle East but also from South America, Europe and Africa, under her wing most recently.

“I’m amazed how well some of them are doing.”

Some of them work their way into Dal’s med school, making the road to an internship that much easier. Others aren’t as lucky and have to search for work in different fields.

Casey understands this because, over the years, she’s gotten to know the newcomers.

When she can she keeps in touch. She wants to know how they are doing in this new place where life can be a struggle for every immigrant.