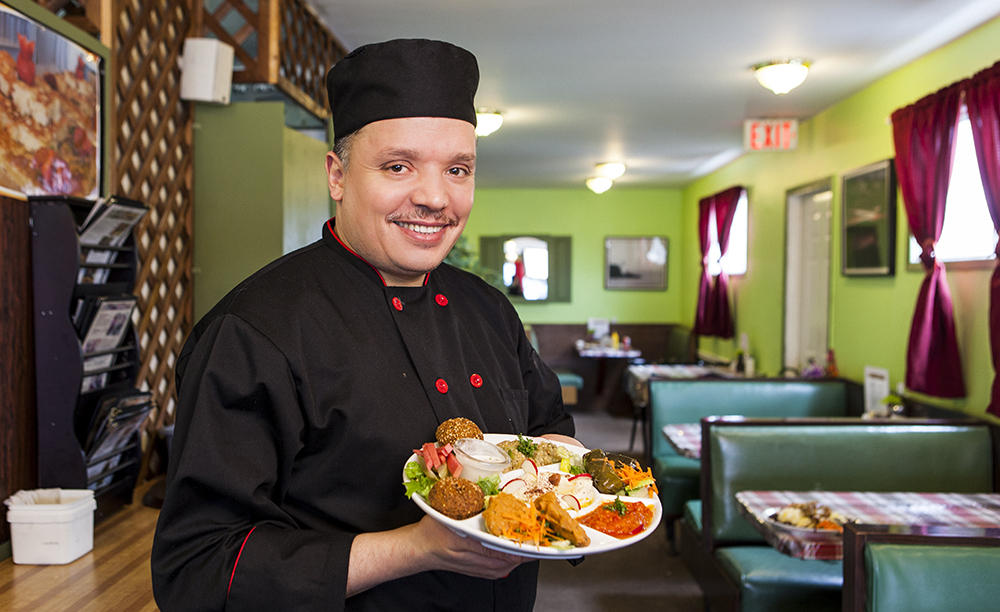 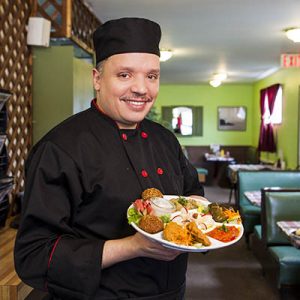 It’s a long way from being personal chef to a Prince, to operating a Halifax restaurant. But that’s the path Abdul Kadar Sadieh has taken. After working almost three years for Prince Moshal Bin Abdul Al-Azez of Saudi Arabia, his life took a sharp turn in 2003 when he returned home to Syria to marry and then moved to Halifax.

Abdul was hired as executive chef of Sahara, an Egyptian restaurant on Spring Garden Road, where he stayed for a year, followed by six years as head chef and deputy manager of Turkish Delight Restaurant. He was cooking in a commercial kitchen to sell meals at the Halifax Farmers’ Market when the opportunity arose to open his own restaurant, Chef Abod, in the city’s north end. Abdul says his philosophy is to start big. “If you start small, you’ll always be small.  I’m so happy with my restaurant.” He specializes in Middle Eastern food and now has many regular customers as well as catering opportunities.

Abdul hadn’t planned on coming to Canada and says he had actually encouraged his brother to apply for the Sahara job. Abdul was accepted instead. His wife, Nemat, was keen to come here so Abdul came first and she soon followed. They have three children: Abdul, 1, Noor, 6, and Mohammed, 7. Abdul knew little about Canada and was shocked when three months after his arrival, the devastating Hurricane Juan hit. “I thought, oh my, what is this?!”

I love Halifax. It’s so friendly, very simple and nice. I love the people here.

He had earned his Diploma of Culinary Arts in Syria and worked for five years in a restaurant there and four years as executive chef at the Imperial Suites Hotel in Bahrain. But working in Saudi Arabia for the Prince will always stand out. “Those were the two most beautiful years of my life. I worked with the Prince, but I felt like the King!”

But the charming restaurateur says he’s happy with the unexpected twists his life has taken. “I love Halifax. It’s so friendly, very simple and nice. I love the people here.”

Abdul’s connections with Immigrant Services Association of Nova Scotia continue as he sometimes caters for special events and has a table at trade fairs and the holiday open house. He recounts cheerfully that during an Immigrant Services Association of Nova Scotia event he suddenly received a call to cater for 50 people that very evening. No problem! After all, once you’ve cooked for a Prince, anything is possible.