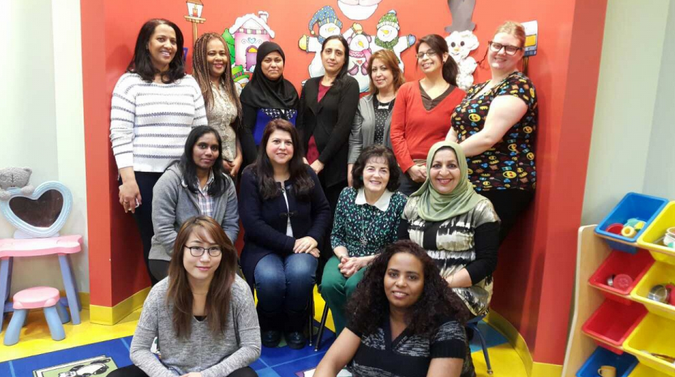 All hands on deck: How one CNC program coped with the influx

ISANS Care For Newcomer Children (CNC) Program is no stranger to welcoming newcomer families with open arms. When approximately 100 Syrian refugee families arrived within the same period, the staff had to stretch their arms that much wider. While parents attended workshops, caregivers had to provide short term care to 22 new children at a time. This was in addition to running their regular program. Flexibility and a team approach with all hands on deck were key to managing the influx of newcomers.

The team’s first introduction to the refugee families was at their hotel where intakes were happening.  As experts in newcomer care, ISANS staff was asked to consult. Caregivers rolled up their sleeves and tackled the first challenge–helping volunteers set up a place where the children could play so that parents could meet privately with settlement workers. ISANS suggested creating barriers to keep the area separate and safe. They also looked at strategies for safely grouping the children. Most families had multiple children who wanted to stay close together, so the caregivers created multi-age play areas. This concept was also incorporated into their regular program. As long as ratios were met, this approach was incredibly valuable for helping siblings to feel comfortable.

The next challenge was parent registration and child care during workshops. Despite extensive experience and knowing what to expect, this was an overwhelming undertaking.  The number of children all at once, their diverse life experiences, and the language barrier made it new territory for all staff. It required learning and adjusting their actions as they went along. Each day, the ISANS team would get together to debrief. They discussed what worked and what didn’t – and made modifications before the next workshop.

“Collaboration with both the settlement staff and parents was important—because we had to learn about the family as a whole. The parents needed to understand how to best support their child in our program,” recalled Tayitu Sebsibie, Supervising Team Lead at ISANS.

Parents would initially just tell the children to go play and then try to leave. That way, they could speak with staff or attend workshops more quickly. CNC staff decided that it was important to register families one at a time to give them a good orientation to the program. They explained to parents that it was okay to have the children sit with them, and talked about the importance of gradual transitions. They also told them that it was normal if their child was not playing like the other children, and counseled parents to be patient and talk to their children to let them know they will be okay.

Making the program and schedule more flexible also made a big difference. For example, they started to offer snack options during playtime, because children seemed more content to sit with parents and get comfortable in the program if they were eating.

Reflecting back on those first few months after the new families arrived, Tayitu acknowledges it was a stressful period for the staff. But it was also a great learning experience. They learned how to be flexible and work together when faced with many new challenges. And they also learned when to take time for themselves. In the end, it was an extremely rewarding experience to be part of helping so many families begin their new life in Canada.