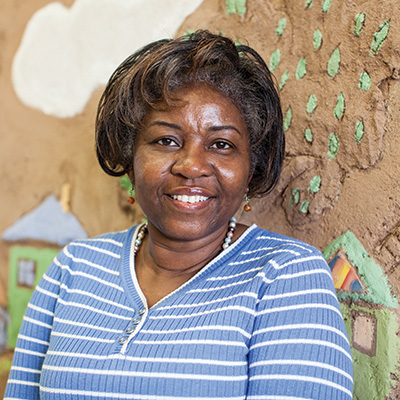 After three years in Canada Floralba Mosquera was looking forward to a trip to her native Colombia. But tragedy struck when her husband Olmedo, a cabdriver, died in a car accident. “It’s been four years, but I’m still grieving,” she says, adding that in time she will go back to visit.

Olmedo’s death made life more difficult for Floralba, but she credits ISANS for guiding her through the hard times. And soon after the accident she became a grandmother. “That baby really helped me; it’s amazing.”

Because of the dangerous political situation in Colombia, Floralba and her husband, both teachers, fled in 2007 with three children, now 28, 25 and 19. “The only thing I knew about Canada was that it was the best country to welcome everybody and that it was good for human rights. I knew this was the place I had to be.”

At home she had studied math and physics and taught school – from elementary to high school. When she arrived here she was homesick and felt a great culture shock. “It’s hard to work in the field you worked in at home. And it was challenging for me as I didn’t have the language. I had to start from zero.”  Her husband spoke English and, as well, ISANS often provided an interpreter. But Floralba worked hard on her English, taking classes – both in person and online – and practicing with a tutor. She also joined a YMCA immigrant women’s group and sold empanadas, tortillas and tamales at the farmers’ market. “It was helpful for me to be involved in the community, practice my English and learn more about Canadian culture.”

Floralba substituted at a daycare and in 2013 obtained a full-time job at Developmental Centre for Early Learning at Joseph Howe School. “I love working with children. It’s in my heart.” She continues to take courses toward her Certificate in Early Childhood Education.

Floralba feels part of the community and is active in her church. “ISANS helped me to interact. They became family to me.”  Over-coming cultural differences has been challenging. “My husband was stressed out looking for a place to dance,” she says laughing. “So sometimes we danced at home.” Son John works in sales; another son, Jonathan, transferred from Saint Mary’s University to Alberta to play soccer and study business; daughter Wendy attends university. “She’s my friend. We call each other and we shop together, go out for dinner.” They speak Spanish at home, an opportunity for her daughter to practice.

Floralba has seven sisters and one brother, all in Colombia. She contacts them often, but remains here. “This is the country God chose for me. Canada opened the door for us. It’s for a reason.” Floralba has become a Canadian citizen. “For me it was a huge thing. I realized that now Canada is really my home. People I’ve met here are my family. I don’t feel like a stranger anymore.”