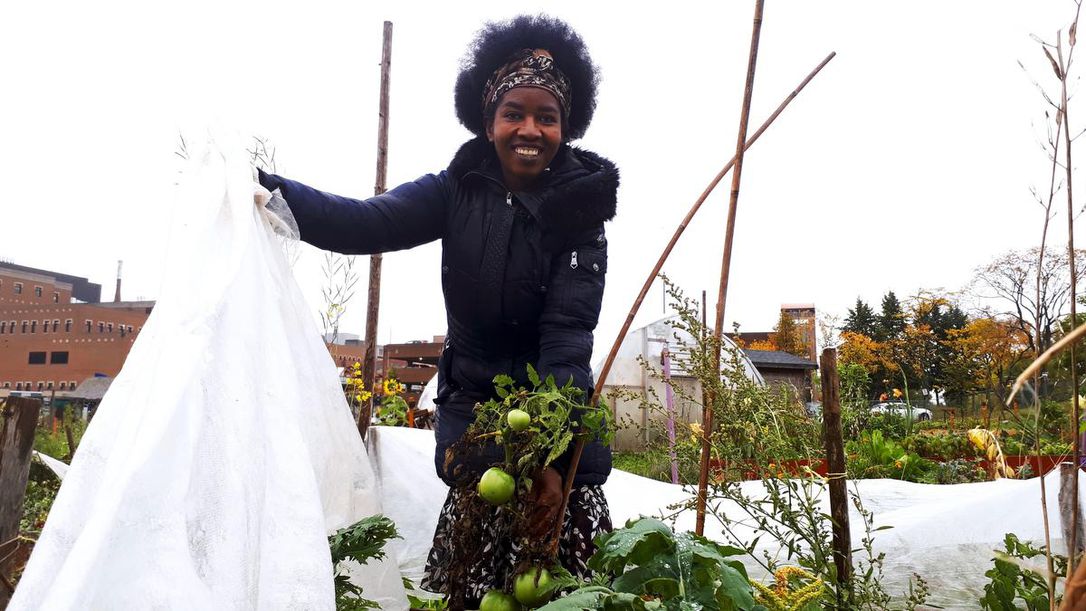 HALIFAX—Having outgrown its current location of seven years, Common Roots Urban Farm in Halifax has launched a crowdfunding campaign to fund its transition to a new home.

Finding a new, farmable space is proving to be a difficult task for the farm, which needs to vacate its current spot next to the Halifax Infirmary by April 2019 to make way for expansion to the infirmary site.

The idea of uprooting the farm is bittersweet for Janet Niyonkuru, who is diagnosed with post-traumatic shock depression and uses farming as a way to improve her physical and mental health.

“I’ve been on medication for a long time, since I came to Canada,” she said.

“But when I start growing my own food, I get off medication. My mood is fine. I feel energized, I feel very happy.”

Originally from Rwanda, Niyonkuru lived in Burundi, Tanzania, and Uganda before moving to Canada in 2007. She first started working at the farm three years ago, interpreting for newcomers in French, Swahili, Kirundi, and Kinyarwanda. Last year, she began a plot of her own.

She said the farm, which has long held a partnership with the Immigrant Services Association of Nova Scotia, is a valuable resource for immigrants because many of them, like her, come from farming countries and may not be able to start a farm at their new homes.

“When they get here, they feel disappointed because they’re not able to grow food, they’re not used to relying on grocery stores,” she said.

“When I started telling them, ‘we have this spot where you can grow your own food,’ they say, ‘oh, wow!’ They were so excited. And then they started coming.”

She said she’s concerned the new location might not be ready for next year’s growing season, but she hopes the project will gain enough community support to make the transition as painless as possible.

On Thursday, Common Roots Urban Farm said it’s looking at all the options for a new site suggested at a public engagement meeting in the spring.

While the farm was originally slated to close down this month, the province’s Department of Transportation and Infrastructure Renewal recently granted them permission to stay until April.

“We’ve looked thoroughly at municipal, provincial, and federal options, and all of these take quite a lot of time, so we’re really grateful for the new timeline to help us make the right choice,” said Jayme Melrose, the farm’s former project co-ordinator.

“We are now looking at privately-owned public spaces and are reaching out to talk to land owners and developers to see if there are any large, sunny areas where we can grow.”

Common Roots Urban Farm said the move is expected to cost up to $60,000, but hopes the crowdfunding campaign will help mitigate some of that cost. They will also hold a plant sale on Saturday and a pumpkin smash and silent auction event on Nov. 3.

Melrose added that they feel “really confident” about a $100,000 programming grant application submitted to the provincial government.

The farm has announced new partnerships with PBJ Design, a non-profit with experience managing “small projects with big impacts,” and MetroWorks, a community-based not-for-profit focusing on economic development and helping people improve their employment skills.

Dave Rideout, MetroWorks president and CEO, said he’s been a supporter of the project for a long time and he believes working on the farm goes hand-in-hand with what his organization is trying to do.

“When people are engaging in employability skills, they need an activity that has an outcome associated with it,” he said.

“So working at a farm, where you’re helping things grow, at the end of the day you have something tangible to take from it. It means a lot to individuals.”

Since it began, Common Roots Urban Farm has grown nearly 45,500 pounds of food and has welcomed 2,500 visitors annually.

It has also provided land for eight newcomers to start local farm businesses.