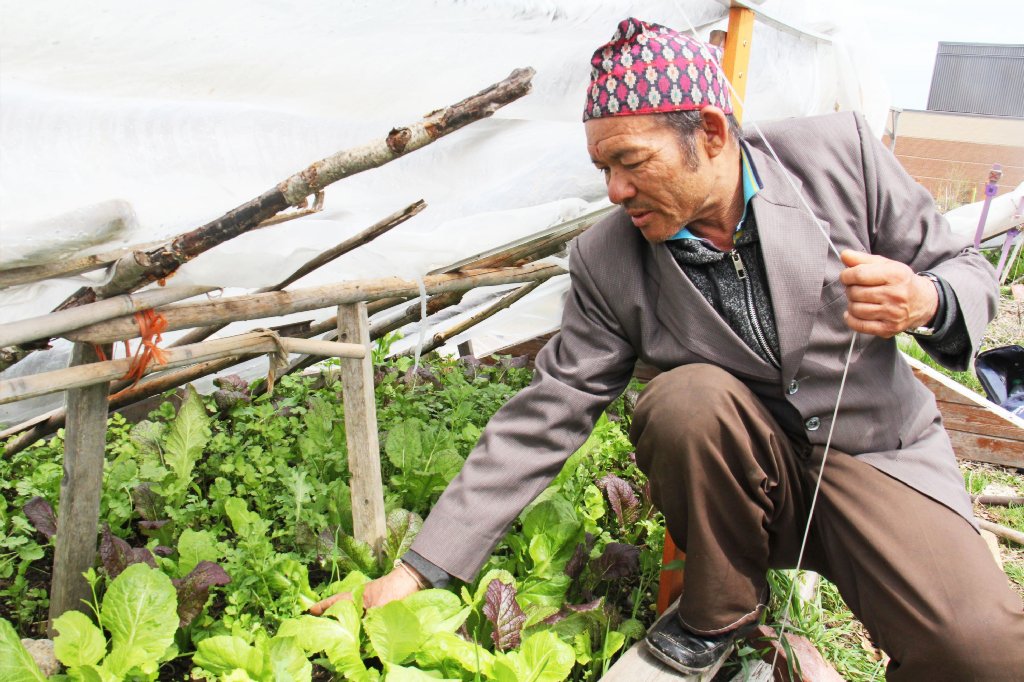 Amber Bhujel set an ambitious goal for himself last August as he planted his garden – to keep things growing throughout the winter.

Despite the enviable levels of snow he would face, and having never grown in such conditions before, Bhujel, through years of experience of trial and error with agriculture, was confident with the right care, his plot at the Common Roots Urban Farm in Halifax would provide him with fresh food year around.

This winter the Nepali-Bhutanese immigrant successfully grew a garden of mustard seed and cilantro, by building a makeshift greenhouse out of sheets of plastic, sticks and bricks.

Bhujel comes from a long line of farmers in Bhutan; he lived as a refugee in Nepal for almost 20 years before moving to Canada in 2011.

“When I was in a Nepali refugee camp, every couple of months we used to get a chance to go on these agriculture trips, where we would get taught what to grow in winter, what not to grow in winter,” said Bhujel through a translator on Sunday.

He also said Americans would send their seeds to Napal and he would have test which seasons these seeds grew best in, teaching himself about the important role climate plays on agriculture.

Bhujel came to the Urban Farm through the program, Deep Roots, with Immigrant Services Association of Nova Scotia. He began by volunteering an hour or two of his time to help out around the farm, before taking on a plot of his own.

“When I first arrived here and I saw this plot of land I got such a surge of energy that I thought that I could virtually grow anything on this plot,” Bhujel said.

Jayme Melrose is the project director at Common Roots Urban Farm and said the diverse knowledge immigrant farmers bring to the garden creates a community who not only help each other produce food, but learn from each other as well.

“It’s partly because they lived in amazing subsistent farming communities in Bhutan, and then in the refugee camps, because it was such small quarters, their ability to grow a lot in small spaces became very skilful. So now when we look through the garden and we see some of the members of the community that are growing, it’s amazing,” said Melrose.

Melrose describes Bhujel and the other immigrant farmers as a sort of wisdom keepers, and the farm will be hosting an array of workshops for the community to learn from these individuals throughout the summer.

You can purchase freshy grown produce by Bhujel and the many farmers at Common Roots, as well as your gardening essentials at the on farm market stand on the corner of Bell and Robie street.

If you go: You can purchase freshy grown produce by Amber Bhujel and the many farmers at Common Roots, as well as your gardening essentials at the on farm market stand on the corner of Bell and Robie street. It’s open Tuesday through Thursday from 11:30 a.m. to 5:30 p.m.