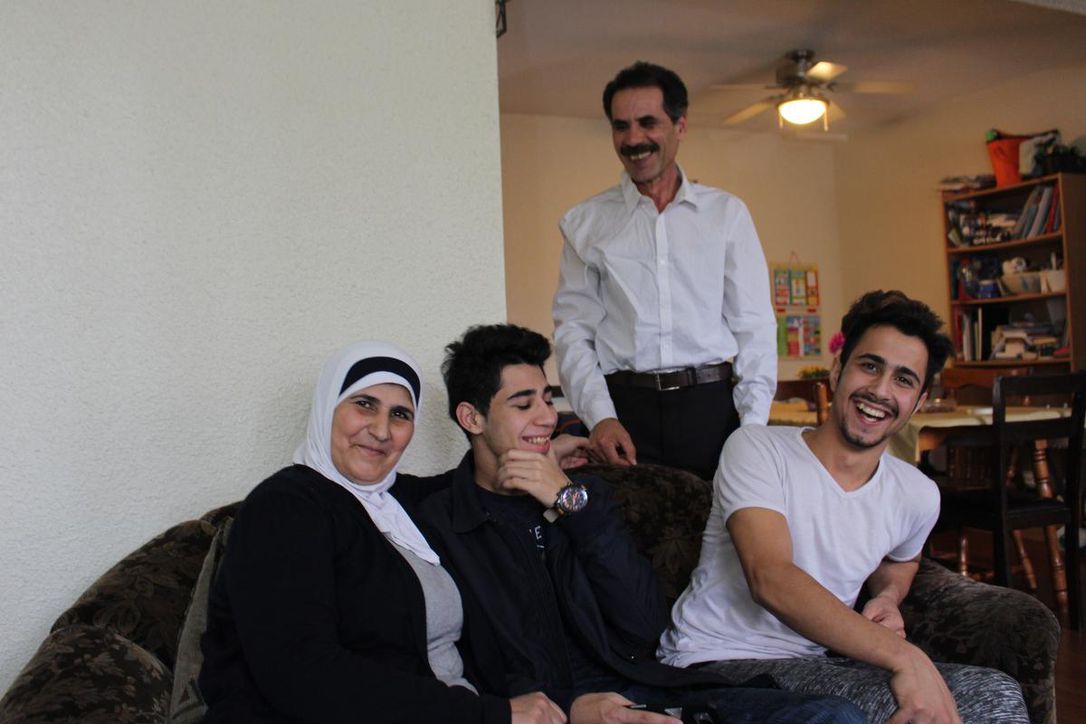 HALIFAX—In many ways, the Al Saieds fit the mould of an average Halifax family. They drive a Toyota. The father, Mohamad, works in construction. His wife, Rouida, works as a cleaner for their condo complex.

The kids are in school, with big dreams: 16-year-old Hana wants to be a police officer, journalist and a nurse. To this idea, her older brother Khaled, 20, smiles lovingly. He’s hoping to attend school to

become a pilot in the fall.

“It’s the dream,” said his brother Mahmoud, 17, in an interview last month alongside his family.

But it wasn’t always this way. The Al Saieds arrived nearly two years ago in June, as one of many Syrian refugee families arriving in Halifax since 2015.

“Once we came here, we had nothing — we start from zero,” says Khaled.

Finding a place to call home was a challenge for resettling Syrian families due to their typically big sizes, said Nabiha Atallah, manager of communications and research at Immigrant Services Association of Nova Scotia (ISANS).

Refugee families get government assistance that is indexed to the province’s social assistance rates, often along with the child-tax benefit, according to Atallah. When this isn’t enough, private donations from corporations helped some bigger families secure housing – but money is still tight.

But today, the living room is skirted with couches, decorated with lamps and has a TV in the middle. The Al Saied’s house feels like a home – thanks to the kindness of a stranger.

“There was a woman who came to our home and asked us if we need anything,” says Khaled.

“Then she looks around, and sees we have nothing. So she basically gave us all the things here.”

The woman told them to give her a call if they ever find another family that needs anything, as she had connections to a furniture business, says Khaled. The family has gone on to help her help others this way.

“The first time we met her, it is like we have known her for a long time,” emphasizes Rouida, with Khaled’s help articulating. “Just the feeling that you know a person.”

The Nova Scotia community has been very welcoming towards Syrian refugees, according to Wenche Gausdal, manager of refugee resettlement at ISANS.

“It’s been heartwarming to see the support they’ve received in so many different areas,” said Gausdal. “People have been eager to learn and to understand the refugee experience.”

Diana Goodz, a retired teacher, volunteers with the Halifax Refugee Clinic. She began teaching English to new immigrants, but five years later, she finds her role often extends beyond that.

“Basically we are all newcomers to this country, really, unless you’re Indigenous,” said Goodz. “And it’s totally an act of luck that we ended up here and not somewhere with horrible conditions.”

Goodz says most people she knows would help those in need “in a minute.”

“In Jordan, if you say ‘hi’ in the street people will say, ‘what do you want?’ But here, no,” says Khaled. “I find it so different. Before you say hi, they smile in your face. Everyone is kind here.”

Khaled says in his first week in Halifax, he met a Canadian friend just by walking on the harbourfront. Another, he met at the community pool. He says these are his close friends to this day.

“The kids are settling in,” said Gausdal. “What we have found with children and youth, is that they’re very resilient and absorb all this very quickly.”

As for the parents, Mohamad exclaims that the family has “too many” friends, with a joking twinkle in his eye. Rouida says that when they first moved in, all the neighbours came by to introduce themselves.

But adjusting to a new country doesn’t come without challenges.

“The first time my mom saw the snow here, she started crying, because it was too much,” said Khaled, teasing his mom.

“Now, no cry,” laughs Rouida, as snow falls outside the living room window.

The weather can be hard to get used to, agrees Gausdal, but meeting immediate needs, like language and employment, are more of a concern upon arrival.

“In general for refugees, and not just for Syrians, a barrier could be the language,” said Gausdal. ISANS helps newcomers to be effective in their job search by providing strategies and programs.

Atallah says while “not a huge number” of the Syrian refugees ISANS works with have found employment, most employed refugees are working in their field.

Mohamad and his wife completed a construction course at Nova Scotia Community College through ISANS. Mohamad says he is able to practice his English a lot now at work, and in ISANS language classes with Rouida.

Eventually, the family aspires to start their own construction and design company. Back home, Mohamad used to make elaborate decorations like fountains.

“Art, art – everything for art,” his father chimes in.

Looking towards the future, the family also hopes to reconnect with loved ones. Some have been scattered across the globe as refugees – in places like Germany, and the United States – but some remain in danger.

While the Al Saied’s oldest son and his family are in Jordan, Rouida still has sisters in Syria that she worries about.

“Nobody can leave Syria because it’s so dangerous to get out,” says Rouida. “So getting out for us was lucky.”

But their son has had some luck: he and his wife and two children have been approved to come to Halifax as refugees. Rouida and Mohamad will soon be meeting their two-month-old granddaughter for the first time.

“My dream is for my son to come. When he is coming, no problem,” says Rouida.

Mohamad jokes that now that he’s a grandpa, he’ll need two canes to walk with — one for him, and one for his wife.

“Not yet!” she shoos him away with a smile.

Gausdal said she thinks in general, people in the Syrian refugee community are more comfortable in their settings now.

“They went through a very traumatic situation and it takes awhile for them to feel safe and secure in their new place, and starting to create a normalcy in their days,” said Gausdal. “Their life is starting to move on.”