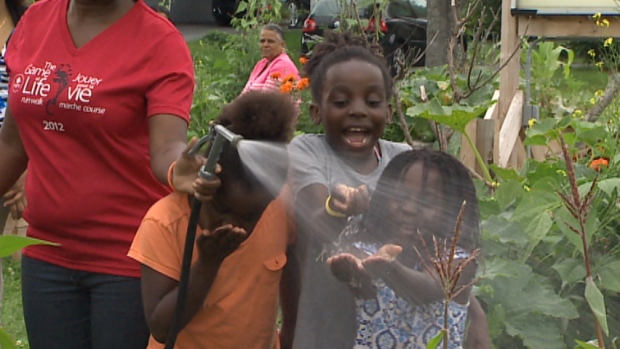 Refugees accustomed to growing their own food in their home countries are finding garden space in their newly adopted Halifax neighbourhood.

This summer the Immigrant Settlement & Integration Services is helping seed the fourth garden in four years. The Mosaic Ministries, an independent church on Willett Street in Halifax, donated the land.

Many of the gardeners are from the South Asian country Bhutan, a Buddhist nation where prosperity is measured by the happiness of its people. The Bhutanese were the driving force behind the first garden on city land next to a bus stop.

Monica Mussa fled war-torn Congo just seven months ago. She says the plot of land isn’t big, but even half a row in the middle of a city is a welcome thing.

Monica Mussa is a refugee from the Congo who arrived in Halifax only seven months ago. (CBC)

The garden’s pumpkins and squash are growing well, but it’s the pumpkin leaves that are a favourite boiled vegetable for some of the African families. The beans plants are ten feet high.

“One thing we are is from agricultural countries,” he says. “We have experience and knowledge we can do here. We can grow.”

Rai starts community college next week and says the gardens can offer soothing familiarity. He says that is especially important for elderly people uprooted from their culture and struggling with a new language.

About 80 refugee families are now buying their own seeds and growing their own food, a help with the grocery bill.

The tomato crop didn’t thrive and the gardeners say they’d love to have more space, but they are already looking forward to next year.

Check out the article on www.cbc.ca